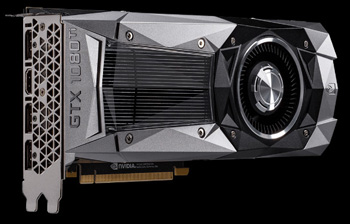 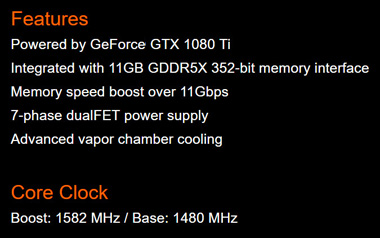 The GIGABYTE GeForce GTX 1080 Ti FE video card is the latest addition to the ultimate gaming platform. This card is powered by NVIDIA Pascal architecture – the world’s most advanced GPU architecture, equipped with next-gen 11 Gbps GDDR5X memory & a massive 11 GB frame buffer, and loaded with innovative new gaming technologies, delivering extreme gaming horsepower and opening the door to virtual reality and beyond.

Worried about the blistering heat generated during your gameplay? Relax. The combination of a radial fan and an advanced vapor chamber provides superior heat dissipation performance that keeps the GPU cool under even the most intense gaming conditions.

The GeForce GTX 1080 Ti graphics card is powered by Pascal to deliver up to 3X the performance of previous-generation graphics cards, plus breakthrough gaming technologies and VR experiences.

Capture and create in-game screenshots that can be viewed in 360 degrees. Compose your screenshots from any position, adjust them with post-process filters, capture 4K HDR images in high-fidelity formats, and share them in 360 degrees using your mobile phone, PC, or VR headset.

Unprecedented gaming horsepower. Exceptional craftsmanship. A 7-phase dualFET power supply. All cooled by a radial fan with an advanced vapor chamber designed to for consistent performance in even the most thermally challenging environments. This is the forward-thinking innovation that makes the GeForce GTX 1080 Ti the Ultimate GeForce. 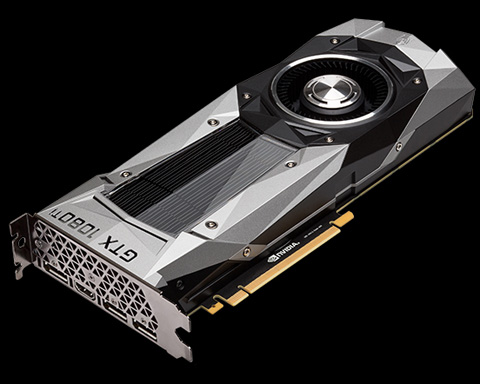